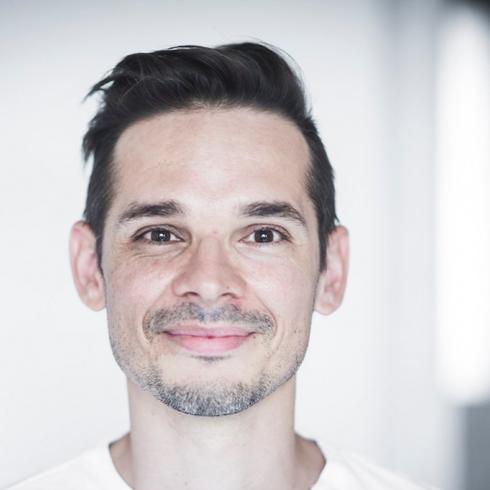 Miroslav Srnka studied musicology at the Charles University in Prague (1993–99) and composition at the Prague Academy of Performing Arts with Milan Slavický (1998–2003). Study trips took him to the Humboldt University in Berlin 1995-96 and the Conservatoire National Supérieur de Musique in Paris in 2001. 2009 he has been awarded a Composer’s Prize by the Ernst von Siemens Music Foundation.

In 2005 his short opera “Wall” after Jonathan Safran Foer was premiered at the Berlin State Opera. He was “Composer for Heidelberg” at the Theater Heidelberg in 2006-07. In 2011 his chamber opera “Make No Noise” was premiered at Bavarian State Opera in Munich, as well as “Jakub Flügelbunt ... und Magdalena Rotenband. Oder: Wie tief ein Vogel singen kann” Comics for three singers and orchestra at the Semperoper Dresden. In 2016 “South Pole. A dual opera in two parts” was premiered at Bavarian State Opera in Munich, conducted by Kirill Petrenko and directed by Hans Neuenfels with Rolando Villazón and Thomas Hampson.

As of 2019 Srnka is Professor of composition at the Hochschule für Musik und Tanz in Cologne.

In 2017 the Dialoge Salzburg presented a composer’s portrait with numerous performances and premieres. The ongoing cooperation with Quatuor Diotima performing his latest quartets europe-wide culminated in a Portrait CD at Naïve. For the orchestra's centenary in 2018/19 the Los Angeles Philharmonic commissioned his piece “Overheating”. At Musica viva Munich his composition “Speed of Truth” was premiered by clarinettist Jörg Widmann and the Symphony Orchestra and Choir of the Bayerischer Rundfunk, conducted by Susanna Mälkki.

The season 2019/20 will bring the first cooperation with the Czech Philharmonic and Peter Eötvös conducting his “Move 01” and "Move 03”, as well as the world premiere of a new piece for Cembalo and Orchestra for Mahan Esfahani, François-Xavier Roth and the Gürzenich Orchestra Cologne.

As the title implies, Move 03 is part of a series of pieces inspired by the idea of movement. Despite being metaphorical, this notion takes on special resonance in the work of Miroslav Srnka, already evoked in the Engrams quartet (2011) with its reference to the fluid structure of flocks of starlings on the move.

In Move 03, the feeling of motion is again related to the profuse, but perfectly coordinated interaction of many fluxes. Through their recurrence, despite their transformations and recombinations, certain salient elements impose a sort of ‘scavenger hunt’ on the listeners’ memory.

Miroslav Srnka is inclined to develop harmonic fields he brings in as an interference as if he were mixing colours. Though one might perceive furtive impressions of diatony, chromatics, pentatony and the superposition of fourths, here and there, these tints are in fact never pure, but intentionally disturbed by foreign bodies. In fact, one of this piece’s most remarkable characteristics is its harmonic sfumato. The textures are characterised mainly by the multiplicity of polyrhythmic strata, some associated with a diagonal progression of voices that grant a sideways movement to the harmonic sequences, while blocks of chords, sculpted and shaped, are caught up in their envelope.

The grand orchestra, with the woodwinds and brass by threes or fours, plus six horns bearing their own material, is thus provided with forms of playing that promote granulosity — one of the most original being the use of electric milk emulsifiers, along with the piano, marimba, vibraphone and steel drums — and fibrosity imputable mainly to extreme division of the strings and, more generally, the damping of attacks.

The great ductility of this amalgamated sound also results from the many changes in the beat, which impact on the harmonic content. This achieves a remarkable quality of Srnka’s music: by bringing together, in complex correlation, elements that are, if not simple, at least identifiable, the composer creates perceptible complexity that, far from saturating and thereby neutralising the listening experience, stimulates it.

In Moves, his composition for the Bavarian Radio Symphony Orchestra, Miroslav Srnka plays with perception, with the experience of combination and contrast, both in the structural sense, and in particular in the (psycho-) acoustic sense. Thoughts on the limits of memory when listening and about the predictability of a soundstream led to the design of self-contained musical ‘moment forms’. In each of these an organic soundstream unfolds whose basis is a sophisticated, controlled structural web. This is generated from a mathematical curve, that vector description which was developed by the French mathematicians Pierre Bézier and Paul de Casteljau for car design.

Gestural and formal moments are shaped from this as independent units of movement, but corresponding with the “orchestral physiology”. The movements of the musicians are included as musical means, but they are not only seen as a means to the end of the tonal result which is sought after, but also inversely as physiological natural movements with the sound as a “secondary result”.

The two moves form the beginning of a series which is dedicated to similar phenomena. Srnka is interested in generating structures which break down and become absorbed in sound and movement. Finally, an extensive look at a performance situation results: at people as music makers with their entire movement physiology and at people as perceivers in their physical sphere. And not least, it deals with a fundamental musical question about the feeling for form and time: about the sensitive dividing line where rhythm ends and form begins.