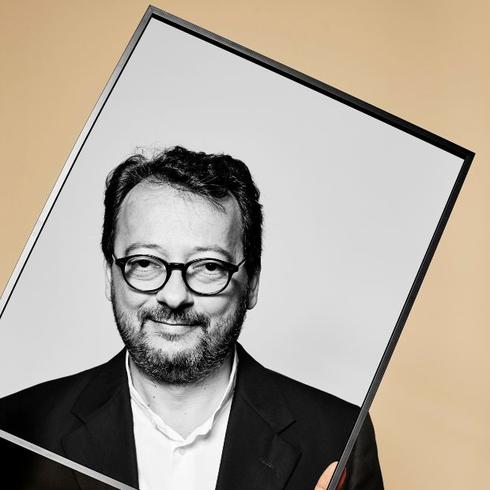 In 1984 he began his musical studies at the musical art school "Jordan Misja" in Tirana specializing in Accordion and graduating in 1988.

In 1989 he began his Composition studies at the Conservatory of Tirana to continue in 1991 to  the "Tito Schipa" conservatory of Lecce, where he graduated in 1999. Further training with Sandro Gorli from 1994 to 1996 (Ostuni) and Alessandro Solbiati from 1999 to 2002 (Milan) will be important for his own compositional training.

He graduated in Electronic Music in 2009 and is pursuing his activity as a composer, instrumentalist, improviser.

He writes music for chamber ensembles and orchestra, theater and film.

The chamber opera in Albanian and Italian tells the story of the shipwreck of a boat full of men, women and children that sank in the channel of Otranto in March 1997; the opera is made of water, salt and rust. Archaic elements are deposited on the texture of the instruments like rust on the metal of the ship: polyphonic chants (according to some, dating back to the times of Homer), Albanian (an Illyrian language), the sound of the cupa-cupa. The electronics re-elaborate recordings of the sound of water and metal, and reverberate throughout the whole opera, like the polyphony typical of southern Albania, ancient chants in three or four voices in which one voice sings the chant, the second and third contraposing it, with various voices in a bourdon. The instrumental part makes frequent use of noise sounds, has its own autonomy and uses a gestural writing that follows its own narrative path parallel to that of the voices. The curtain opens on Albania in 1997, in full civil war: shots, cries, fear, disorder, chaos, anarchy on the streets of a disoriented nation; people try to flee at all costs; in the port of Vlora a boat is ready to leave for Italy. The music narrates these three moments: the civil war, the flight towards the port, the moment of boarding the Katër. Here the dialect of the south-west is used, that of Vlora, which is also the place of origin of most of the victims. The words with the inflection typical of that dialect are employed as sounds, they form the basis for the melodic texture; the four voices repeat them in a chaotic series of calls, exhortations, which overlap, multiply, go crazy. The journey begins.

The narration slackens, it is a moment of calm: they speak of the crossing of Pyrrhus, king of Epirus; the Italian dream born of the television, the love of music and of jazz in particular. In these solo moments reference is made, filtered and transformed, to vocal techniques used in Albanian polyphonic songs, rhythmic formulas derived from uneven beats and harmonic material of traditional derivation.

The unease and claustrophobic discomfort of all the travellers on the ship emerges in the musical turn of Blerina. From the Katër there then arises the chorus of women who implore the Italian soldiers: “Not a single weapon do we have with us, but only children, silent and cold.” The tension of the chorus grows and prepares for the moment of the collision and the sinking of the ship. The account of the sole survivor, Ermal, expresses the pain for the tragedy, the vanishing of the “Italian dream”. The voices of the chorus of the shipwrecked allude to the movement of the lifeless bodies in the water and prelude the final song performed by the polyphonic chorus of Lapardha. Four singers are on the stage; first mother, Zonja (light soprano) and daughter, Blerina (folk voice), second mother (mezzo soprano) and son, Ermal (experimental voice); three actors: a mother and her young daughter and the sailor from the Italian navy; the polyphonic chorus (five voices) “Violinat e Lapardhase”; six instrumentalists: percussion, piano, cello, bass clarinet, trumpet and electronics, accordion and box with analogue oscillators.