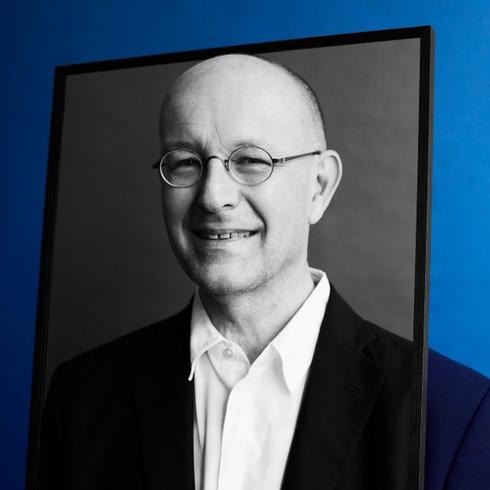 Thomas Larcher studied composition and piano in Vienna.  Today he is celebrated internationally as a composer, pianist and programmer.
In 1994 Larcher founded the festival ‘Klangspuren’, now an international renowned festival for contemporary music. He stepped down in 2003 to establish the Swarowski ‘Music im Riesen‘ festival in Wattens, Austria which he still runs.
Larcher’s early works are characterized by his preoccupation with the piano and its tonal qualities :  Naunz for piano solo (1989), Kraken for violin, cello and piano (1994/5) , Mumien for cello and piano (2001). He wrote works for strings :  Cold Farmer (1999), Ixxu (1998-2004) and Madhares (2006/7), concertos : Still (2002) for viola and orchestra, Böse Zellen for piano and chamber orchestra (2006) and the Violin Concerto (2008).
His first large orchestral score, written for the San Francisco Symphony in 2011 and conducted by Osmo Vanska, was Red and Green,  the same year, the Double Concerto for violin and cello was commissioned and premiered at the BBC Proms with Viktoria Mullova and Matthew Barley under the direction of  Ilan Volkov, for which Larcher was awarded the International category of the British Music Awards 2012.
Larcher writes also for the voice : My Illness is the Medicine I Need (2002) for soprano and piano trio, a much performed work that has recently been arranged by the composer in a version for chamber orchestra, Heute (2005) for soprano and orchestra, and  Die Nacht der Verlorenen (2008) for Matthias Goerne and the London Sinfonietta.
In 2014, A Padmore Cycle, originally for tenor and prepared piano, was recomposed as an orchestral score with voice and was premiered by the BBCSO under Edward Gardner in November 2014.
Thomas Larcher was commissioned by Vienna Philharmonic Orchestra to write a new orchestra; score – Symphony No. 2 Kenotaph. Semyon Bychkov conducted the world premiere at the Musikverein in June 2016, and  the BBC Proms presented the UK premiere in August 2016. Premieres in Germany and Holland followed in Autumn 2017. New York Philharmonic gives the US premiere in April 2019.
Larcher has been Composer in Residence at the Vienna Konzerthaus, the Mozarteum Orchester, Wigmore Hall, and many festivals including Davos, Heimbach,  Risör, Mondsee and Bantry.  In 2015 he received the Chamber Music Society of Lincoln Center’s Elise L. Stoeger Prize 2014/15.
His recordings have been awarded several international prizes, including the Preis der deutschen Schallplattenkritik, the Choc de la musique and the Diapason d’Or.
His first opera The Hunting Gun for Bregenz was premiered this summer 2018,.

Originally conceived as a concerto for orchestra, Thomas Larcher’s Symphony No. 2 takes the form of a classical symphony but retains elements of the original idea, reaching from the intimacy of chamber music to the immense diversity of a full orchestra.
“ I want to explore the forms of our musical past under the light of the (musical and human) developments we have been part of during our lifetime. How can we find tonality that speaks in our time ? And how can the old forms speak to us ? These are questions I often ask myself. This piece is very much about different forms of energy: bundled, scattered, smooth, kinetic or furious.“ (Thomas Larcher)
The subtitle 'Kenotaph' refers to a monument for the dead, an empty tomb for those missing and presumed dead. Larcher composed the work, which was premiered by the Vienna Philharmonic Orchestra in 2016, while haunted by the tragedies of the numerous refugees drowned in the Mediterranean Sea.

Even while writing the original version for tenor and piano, I thought about the possibility of setting this piece for tenor and orchestra. I wanted to let the soundworld of the piano (the ‘reflections’) explode … just like projecting the thoughts and feelings of the inside of a human head on a very large screen, and thus sensing all the details and the dimensions of them.

On the one hand this new version remains utterly faithful to the earlier one. But still, I sense it as a totally different piece now. Indeed it was like composing this music again and so meditating on the substance and the text even more deeply. What came clearly to mind while doing this work is that, for me, the line ‘Hunger nach einer Heimat, die keine mehr ist’ [Hunger for a home that is no more] is the central idea of the whole cycle.

Red and Green are complementary colours related to each other. Red and Green also refers to the two colours which cannot be distinguished when you suffer from colour blindness ... something I do, but only to a little extent ... but it has always been interesting for me to ask myself, how ’normal’ people would see the world. Red and Green are two forms of energy (two movements!) which are indeed different, but have strong links to each other – elements of the one are already existing in the other. And last but not least red and green represents traffic lights and so the order of our whole urban world ... similar to zero and one in the computer world and the computer languages.
Thomas Larcher
© www.schott-music.com