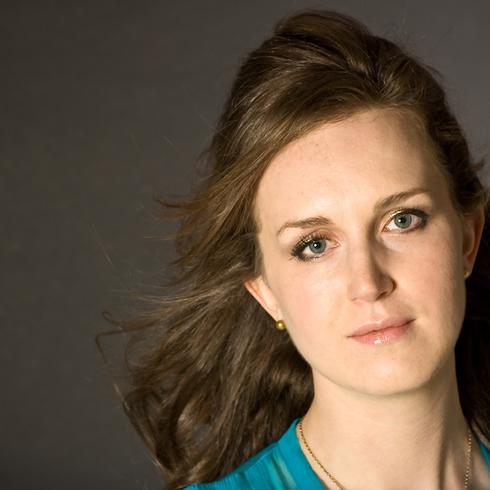 Born in 1981, Helen Grime studied at the Royal College of Music with Julian Anderson and Edwin Roxburgh (composition) and John Anderson (oboe).  She came to public attention in 2003, when her Oboe Concerto won a British Composer Award.  In 2008 she was awarded a Leonard Bernstein Fellowship to attend the Tanglewood Music Center where she studied with John Harbison, Michael Gandolfi, Shulamit Ran and Augusta Read Thomas. Grime was a Legal and General Junior Fellow at the Royal College of Music from 2007 to 2009.

Between 2011 and 2015 Grime was Associate Composer to the Hallé Orchestra. This fruitful period resulted in a series of new works and a recording of her orchestral works released by NMC Recordings. This disc was awarded ‘Editors Choice’ by Gramophone Magazine on its release and was nominated in the Contemporary category of the 2015 Gramophone Awards. In 2016 her Two Eardley Pictures were premiered at the BBC Proms and in Glasgow, winning the prize for large-scale composition in the Scottish Awards for New Music and a nomination in the British Composer Awards the following year.

In 2016 Grime was appointed as Composer in Residence at the Wigmore Hall. Highlights of this period include a day of concerts devoted to her music, as well as the premieres of a Piano Concerto for Huw Watkins and Birmingham Contemporary Music Group conducted by Oliver Knussen, and a song cycle, Bright Travellers, for soprano Ruby Hughes and Joseph Middleton.

Between 2010 and 2017 Grime was Lecturer in Composition at Royal Holloway, University of London. In 2017 she was appointed Professor of Composition at the Royal Academy of Music in London.

Scored for a large orchestra (triple winds, three percussionists, piano, harp, and strings), Limina is a single movement of about fifteen minutes’ length. Its energy, nuance, and multi-leveled activity require a high level of virtuosity and cohesion among the players, but having experienced the excellence of previous iterations of the Tanglewood Music Center Orchestra, Grime wrote Limina knowing she could demand a great deal from the ensemble.

“Limina” signifies “thresholds,” a point at which one state becomes another; in Grime’s piece the thresholds are between musical ideas representing expressive states. The idea of shifting states was suggested by a chapter in the Norwegian author Tarjei Vesaas’s 1963 novel The Ice Palace, which describes a young girl’s emotions as she moves between chambers within a frozen waterfall. Although some of Grime’s previous works have links to imagery or literary ideas, Limina’s connection to Vesaas’s narrative was unusually explicit and direct; the various chambers and the girl’s corresponding emotions determined the episodic structure of Grime’s piece. In spite of this specificity, once Grime was fully involved with the piece, purely musical, compositional concerns became the focus. Although there are a few clear shifts, these musical states are frequently layered and dovetailed with one another, leaving the listener balanced, as it were, right on that liminal boundary. The overlapping of larger ideas and small rhythmic variations among similar parts “blurs” the impact of any expressive state, paralleling the girl’s unsettled blend fear, joy, and confusion. The music also contrasts the girl’s physical fragility with the dispassionate strength and coldness of the ice.

Limina’s opening, marked “Bright, icy,” has a deliberately cold, somewhat off-putting character. This passage develops in increasingly complex waves, filling out the orchestra—shimmering, suspended strings with vibraphone, a glittering, rising figure in high woodwinds, a fragmented chorale in brass. The arpeggiated figure played by three solo violins signals a recurrent dream state. A warming, humanizing element appears with the expansion of the strings into the bass register; the various layers come into clearer focus with definite pulse and distinct melodic lines. Increasing density and intensity leads to a big sustained chord starting the final episode, marked “Ecstatic and tender.” The once-obscured chorale for winds comes to the foreground, but this is still interrupted by the strings’ breathless textures, as though it’s unwilling to take on the full burden of conclusion.

I took my starting point for Luna from a poem by Ted Hughes called Harvest Moon. The piece is cast in one continuous movement but falls into a number of well-defined sections. As I was working on the piece, I started combining the instruments in small groups. Although there is much interaction between all members of the ensemble, the instrumental groups became a defining characteristic of the piece. The piano and percussion often form a duo, breaking into somewhat virtuosic solo passages scattered throughout. The flute, oboe and clarinet form a sort of unified trio, sometimes playing a unison line or combining lyrical lines in the slower final section of the work. The horn takes on a distinctly soloist role, with solo passages building to a mini cadenza, which eventually leads the piece into its final section.
© Chester Music Ltd