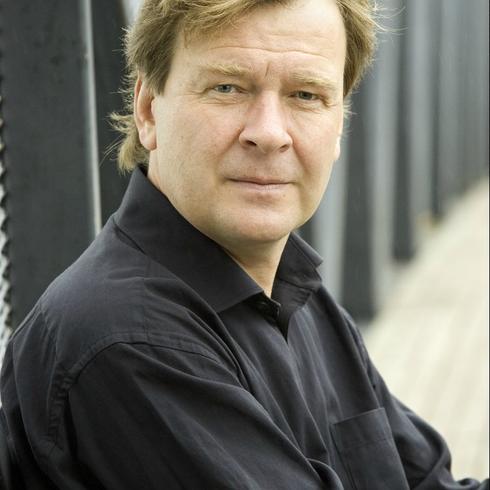 Magnus Lindberg started playing the piano at eleven and studied at fifteen years at the Sibelius Academy, writing, composition and electroacoustic music with Risto Väisänen, Einojuhani Rautavaara, Paavo Heininen and Osmo Lindeman . Magnus Lindberg met Brian Ferneyhough and Helmut Lachenmann in Darmstadt and Franco Donatoni in Siena, and in 1981 became the student of Vinko Globokar and Gérard Grisey in Paris. He works at the EMS studio in Stockholm at the end of seventy years, then the experimental studio of the Finnish Radio and to IRCAM in 1985.

Pianist, interpreter of works of Berio, Boulez, Stockhausen or Zimmermann, he founded in 1977 with, among others, Kaija Saariaho and Esa- Pekka Salonen, the Association Korvat auki (the Ears Open) and in 1980, the Toimii Ensemble (it works!), which will be the laboratory of his compositional experiments.

He is the winner of the Rostrum of Composers in Unesco 1986 for Kraft (1985), which also won the prize of the Nordic Council in 1988. Lindberg was awarded the Prix Italia in 1986 for Faust (1986). The composer also receives the Koussevitzky Prize in 1988. He was appointed professor of composition at the Royal Conservatory of Sweden in 1996.

In 2003 Lindberg was awarded the prestigious Wihuri Sibelius Prize. He was elected member of the Academy of the Arts, Berlin in 2001. He is a member of the jury Tōru Takemitsu Composition Prize in 2004.

Magnus Lindberg takes his title from Edith Södergran (1892–1923), a Finn, like himself, of Swedish family and language. Among the pioneers of modernist free verse in Swedish, Södergran wrote from an “I” that seems very immediate to herself. Her Shadow of the Future, from during or soon after the First World War, begins: “I sense death’s shadow.” After six lines speaking of fate and foreboding, however, the poem in its shorter second part turns to the light: “The future casts on me its holy shadow, which is nothing other than the flowing sun.” Her health declining, the poet foresees a time beyond her death, a time by which she is nevertheless illuminated.

It was this assurance of life amid death that drew Lindberg to Södergran for the first time last year in answering a commission for a work to mark the centenary of the armistice that ended the 1914–18 conflict: Triumph to Exist, also based on a wartime poem. “Her universe continues to inhabit me,” he has said. “When I think of the world as it is today, and of all the shadows that darken our future, this optimism seems to me something we have to hold on to.” Hence the glow and the bound of Shadow of the Future, which he began composing for the Ensemble intercontemporain right after the armistice piece.

The new work is strongly, even emphatically thematic, based on a theme in two segments presented right away by the brass in the opening bars: first comes a march down a fourth in steps of a major second and a minor third, and then, from this, a rise that is more variable but will often go scale-wise and end with a fall back. Big music is already implied, and the promise is fulfilled. As the material is developed, so attention swings from one instrumental family to another, the percussive group—piano, harp and two percussionists at this point on vibraphone and marimba—adding an exotic touch.

After three minutes or so, the 17-minute piece moves into the second of its four parts, with airy woodwinds slowly pushing up through whole tones. Horns restore the main theme, and activity increases, to a point where the third part begins. This features majestic chords such as these musicians rarely get to play together, but ends with an oboe duet featuring a quick circling figure that was heard in the first part. Similar darting figures take over the whole ensemble to begin the final part, in the initial stages of which the brass players are silent. Returning, they are at first muted, but soon bring reminders of the theme. This comes to an apotheosis, amid fanfaring chords from the third part and more dancing figures. The re-arrival of the upward whole tones moves the work into its coda.

Magnus Lindberg’s Second Violin Concerto taps into the vein of rich Romanticism that he had begun to explore in his Clarinet Concerto (2002), choral-orchestral Graffiti (2008–9) and orchestral Al largo (2009–10). As such, it is another chapter in his long-term concern to marry the textural resourcefulness of modernism and the structural power of classical, functional harmony.

Typically for Lindberg, none of the movements bears a verbal tempo indication; in this instance the first one opens = 63 as the solo violin rouses the rest of the orchestra section by section. Rather as Brahms’ Fourth Symphony opens not with a tune in the standard sense but by playing with open fifths, Lindberg’s solo line is not melodically conceived but generates its onward impulse by playing with and expanding little rhythmic ideas and motifs (derived, as Lindberg explains, ‘from the harmonies and pitch patterns’ he was exploring), which then are often picked up and examined by the rest of the orchestra.  The orchestra, too, is almost the one known in musical circles as a ‘Brahms orchestra’: double woodwind (with the addition of a bass clarinet), four horns, two trumpets and three trombones, timpani and strings – but this work also requires two percussionists and Lindberg occasionally makes the celesta and (less often) the harp important dialogue partners of the solo violin. The first movement swells to a series of gentle but richly scored climaxes, with the tempo increasing and slowing organically as the work unfolds; nine minutes in, it coasts unemphatically into the central movement – where the initial tempo marking is the same as at the outset; but the hint of a funeral march suggests that this is indeed going to be the slow movement and soon the string lines lengthen and – though the solo part continues to swirl around like a gibbon swinging through the tree-tops – the pace of the orchestra broadens considerably. But only briefly: a rising figure spreads through the orchestra and leads to one of the most unashamedly Romantic vistas in all of Lindberg’s music – a vision, perhaps, of mountains and forests that wouldn’t sound too far out of place in Richard Strauss’ Alpensinfonie, and it may be, too, an indication of Lindberg’s Finnish (read: Sibelian) heritage. The grandeur slowly fades and out of it, still at = 63, the cadenza emerges, unaccompanied at first, but gradually picking up such strength that the strings and then the rest of the orchestra step in to support it. The music surges and crests and dies away, ppp, taking a deep breath before the violin tiptoes back in, enjoying a brief dialogue with the leader before the rest of the strings pile in to launch the third movement, this time at twice the pace:  = 126. But only 30 bars later, amid swirling woodwinds and flashes of light from celesta and harp, the tempo quickens yet further, to = 144. The music seems set to skip its way to a close, but the solo violin insists on a double- and triple-stopped passage which slows matters down, and a warmly scored coda emerges, broad and dignified, coalescing into a chorale-like passage, out of which the soloist emerges with a rising figure (supported by bass clarinet, bassoons, celli and basses), which directly recalls the very opening of the work.