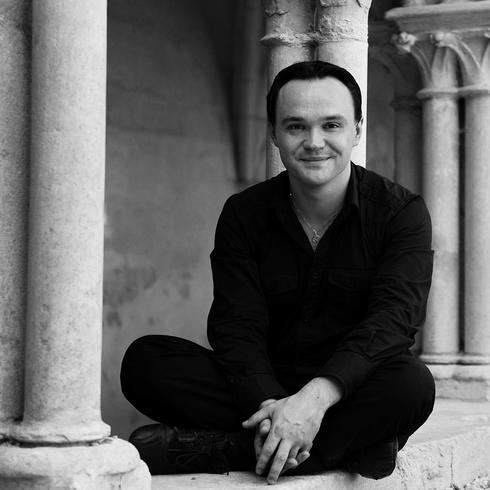 Energy in sounds, carried by meaning

This is how French composer Benoît Menut likes to define his work. He is passionate about the close link between music and words, the latter being a permanent source of inspiration, both in his vocal and instrumental music. The simple rhythm of a verse, a word or a turn of phrase can be at the origin of a creative idea.

Winner of the SACEM Award 2016 for symphonic music (young composer category) and Laureate of the foundations Banque Populaire (2008) and Francis and Mica Salabert (2014), he composes in 2018 for the Opera of St. Etienne Fando et Lis, after F. Arrabal’s piece, and won for this first Opera the SACD New Talent Award 2019 and The Charles Oulmont Prize 2019. He has been pursuing a theatrical trajectory even more pronounced, both for the young public (Stella and the Wish Master, opera premiered at the Philharmonie de Paris in 2020, Symphonie pour une plume in 2016, for The Brittany Symphonic Orchestra, taken over by the National Orchestra of Île- de-France) that for all audiences (The legend of Saint Julien, after G. Flaubert, The little boy who wanted space, J. Giono).

This attraction is also materialized by collaborations with renowned vocal ensembles, such as Musicatreize, The Children Choirs of French National Radio and N-D of Paris, Les Cris de Paris, Les Discours...

Comprising more than 120 opus, his catalog embraces many forms of musical expression, and makes him one of the most prominent French composers of his generation. Chamber music writing - especially for string instruments - has a special place his work.

Born at the western tip of Western Europe, this former student of the Paris Conservatoire was awakened to the tradition by French composer Olivier Greif and continues today his singular path, with among others works inspired by the writers Christian Bobin and Pascal Quignard. He is careful to marry the requirement for lyrical and structured writing and a sincere desire to stay close to the audience and the performers, as a sort of "director" of emotions.

His last monographic record Les Îles, with Emmanuelle Bertrand, Maya Villanueva and the Ensemble Syntonia was released by Harmonia Mundi in 2020.

His music is published by Éditions Musicales Artchipel.

We are in a post-apocalyptic world. Well after the collapse of our world, of consumption, of the construction of increasingly higher cities, increasingly overwhelming ... potential Babels ... This is a fable about the cruelty of the world and the loneliness which eats away at men, like Fando, unable to bear the silence, the approach of the void. It is a world where women gradually dissolve, a no man's land, where Lis is the last woman.

We are in a time of wandering men!

A constant wind sweeps the plateau.

Something is falling from the sky (ash or something else?)

It is a hostile and harsh world.

In this world, there are five crow-men who occupy the space. They climb, move the structures (set changes), fly in the air. Moving the sets will be carried out by four of the crow-men, the fifth can be assigned other actions at the same time as changing the location.