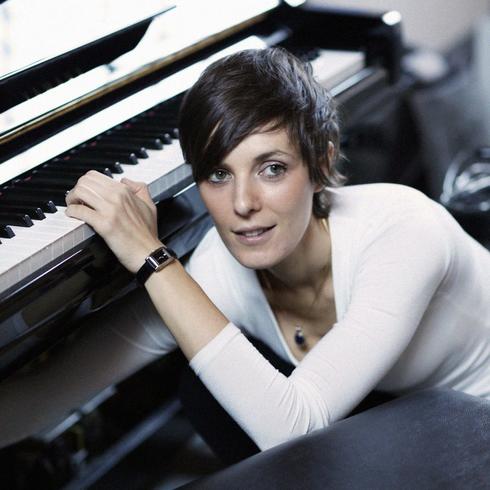 The same year,  at La Biennale di Venezia, she was awarded the “Leone d’argento” prize.

In October 2017 Michael Schmid premiered the first part of a 45′ cycle for player-piano and flute : Man sitting at the piano I. The second part of the cycle – Piano (without the man) sitting – having been premiered in Rome at Swimming is Saving exposition (July 2017) curated by Chiara Parisi. The third and last part of the cycle – Man sitting at the piano II, for bass-flute and player-piano – has been commissioned by Klangforum and will be premiered in 2020.

The poetic origins of Tune and retune go back to my very first experiences listening to an orchestra. I clearly remember the strong impression that listening to symphonic concerts for the first time made on me, when I was very little. I felt this kind of immense breath of this huge mass of sound, and I had the intense perception of it unfolding in time. I can’t express it in words, but I think that anyone who loves symphonic music can understand what I’m talking about.

This piece is a way to remember that breath of the orchestra that’s part of my earliest memories.

From a technical point of view, the piece revolves around a big question: Can the inner temporality of sound and the semantic tempo of the musical discourse be an expression of each other?

This also has to do with a second observation, which regards timbre.

As far as I’m concerned, timbre is neither accidental nor an “effect”. It is the carrier, the vehicle for writing with temporal and poetic momentum.

Timbre and harmony are both part of the same thing, in that timbre has a complex (un)harmonic content – exactly like the symbolic harmonic content of a chord. It acquires “meaning” in the temporal discourse.

Classical orchestration is none other than modifying, enriching, simplifying or altering in so many possible ways the harmonic discourse, thanks to the spectral content of the elements of sound in play. Just take a look at what happens to a brass sound when it follows the indication “from ordinario to cuivré” and you’ll realize how much timbre is always a question of harmony, and thus a question of harmonic discourse, and, when it comes down to it, of tempo and form.

I wanted to push this observation to its most extreme consequences.