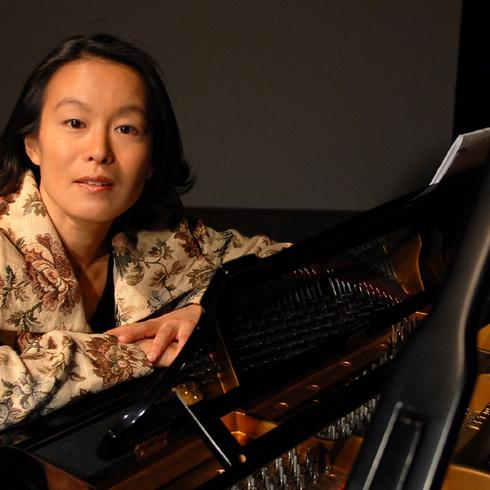 She has received grants from the major studios for electroacoustic music including GRAME (Lyon), SWR Experimentalstudio (Freiburg), ZKM Karlsruhe and the Groupe de recherches musicales (INA-GRM, Paris). Furthermore, she has received numerous prizes and awards including First Prize in the concours of Groupe de Recherche Appliquée en Musique Electroacoustique (GRAME) and Ensemble Orchestral Contemporain in 2006, a fellowship to Academy Schloss Solitude in Stuttgart in 2008-09, a fellowship from the Landesregierung Nordrhein-Westfalen (2010-11), and an artist’s residency in Schreyahn /Germany in 2011. She is nominated for Akutagawa Music prize 2018 in Japan with her orchestra piece Shades of Ochre.

Prayer / Inori II is a new version for 8 voices of Prayer / Inori which was composed for mixed choir a cappella just after the devastating East Japan Earthquake on March 11th 2011. The piece was written as a tribute to all the victims of the Earthquake, Tsunami and Nuclear Disaster.

When I think of human voices, I am immediately reminded of a particularly intense childhood memory.

In my childhood, I often heard the voices of chanting Sutras. They were sung together by both Buddhists priests and the local old women.

The tempo and tunes sung by the old women were slightly diﬀerent than those sung by the priests but still had the overall eﬀect as being one powerful voice. The chanting of Sutras is in fact praying but for me, the singing and the praying were inseparable.

The human voice is the most direct medium for expressing ourselves. And I guess that singing and praying have the same roots.

The poem that I chose for my piece is by Rabindranath Tagore and is entitled “fruits gathering No. LXXIX, and describes praying. It was originally written in Bengal and was translated into English by Tagore himself.

The text portrayed for me a transformation from an introverted murmuring to a releasing of fearless freedom.

I was especially attracted by the idea of “fearlessness”. I discovered that our breathing rhythm aﬀects our fear and memory.

If we’re afraid, our breathing and heartbeat are faster. On the other hand, deep long breaths calm the mind and release us from anxiety.

Following up on Tagore´s universe poem, I attempted to represent my image of praying using sound material such as voice vibration, deep sighing, and breathing which allows us to feel the warmth of life or indeed its clarity and coldness. In certain sections each singer spells out the words. These individual moments overlap and produce considerable energy.

In this composition the idea that numerous microcosms (single people) can form macrocosms, appealed to me.  A single note consists of a mixture of partials and a composition is an aggregate of single notes.

The image of human´s murmuring in their prayers on the earth and progressively gathering energy and achieving a higher level, reminds me of the process of a fundamental note that is being constantly transformed and thereby revealing its partials and creating a rich sound cosmos.

… Kaum einen Hauch… is based on the lyric Wanders Night-song II by Johann Wolfgang von Goethe. The piece is composed by two parts, Through the whole piece, a motif which presents “breathing” (inhale and exhale) provides basis for the ﬂow of music. First parts are constructed by 9 small parts (breathings) which are divided by three groups. Each group represents diﬀerent additional elements, such as smooth linear movement (ﬂow), impulse (heartbeat) and fragment of quote as symbol of the warm traces of a memory. Through 9 times of diﬀerent length of breathings, the music gradually agitates and reach the hilltops.

Second parts represents calm, peace and rest. As Goeth said, above all summits Is quiet now. Here, You sense Hardly a breath but deep stillness.