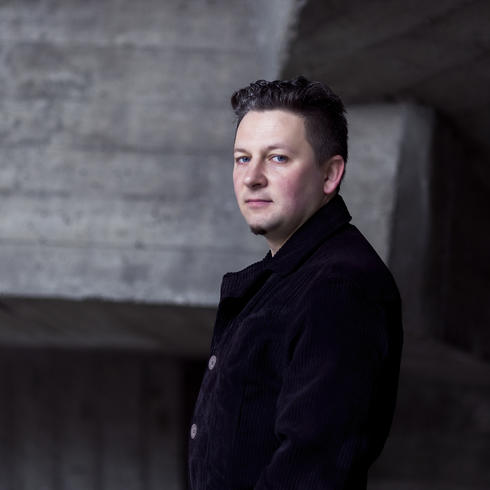 Maxim was born in 1981 in Kyiv. He graduated from the National Music Academy of Ukraine as an oboist (2005) and as a composer (2009) and from the Hochschule für Musik und Tanz Köln as a composer (class of Johannes Schöllhorn, 2016). He took part in International Young Composers Academy in Tchaikovsky city (2013), and reading sessions by Ensemble MusikFabrik. He is the winner of the national competitions Gradus ad Parnassum (Kyiv, 2000), Step to the Left (Saint Petersburg, 2012) and III Prize on Vareler Komponistenpreis (Oldenburg, 2015).

As a solo-oboist played with orchestras Kyiv soloists, Musica Camerata, Russische Kammerphilharmonie St. Petersburg. Together with the Ukho Ensemble he realized the Ukrainian premiere of the concert for oboe No.2 by Luca Francesconi, as also ensemble pieces by P.Boulez, S.Gervasoni, B.Ferneyhough, L.Berio, G. Kurtag and many others.

Maxim took part in master classes in Montepulciano (Italy, 2015) under direction of Johannes Schöllhorn, Florence Millet and Werner Dickel as an oboist, a composer and a conductor.

He was a participant of the Kyiv conductor master classes under the guidance of Luigi Gaggiero (2016).

Since 2015 he is the solo-oboist of the Ukho Ensemble for contemporary music (Kyiv).

Prelude and Espenbaum are two parts of my opera – respectively the prelude and the final scene. These pieces represent a kind of a retrospective of my creative path from its very beginning to the present day. I started working on Preludeas I was a student back in 2003. At that time the piece was to become a part of a cantata on texts by Tristan Tzara. Fifteen years later I resumed this work, making it a prelude to the opera. Quite a riskygesture, for the style of the piece did not correspond anymore to my style at the time of creation of the opera. But on the other hand, it helped me to identify those features of my work that have remained unchanged, being therefore my inner artistic self. Although I had to change the Prelude significantly, one still traces there the traits of my young, sometimes naive, sometimes romantic creation - which actually was particularly valuable to me.

Espenbaumi s the final scene of the opera, written on texts by Paul Celan. According to the plot, in this scene the hero tells about his childhood, about unresolved problems and mistakes. He pours out all his pain and despair coming from the impossibility of reconciling with the past, accumulated over years of wanderings. At the end of the scene the hero jumps off a bridge.