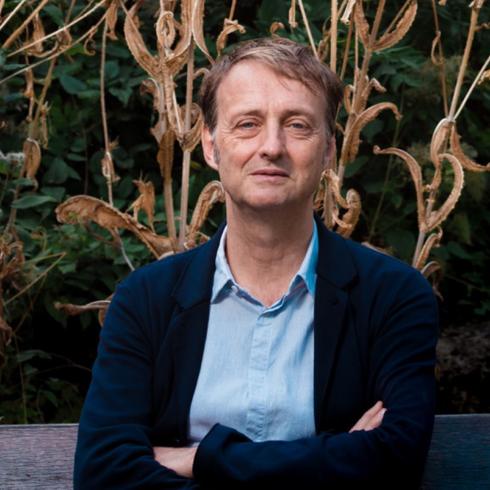 Born in 1960, he studied at the Paris National Conservatory with Gérard Grisey. There, he won first prize for composition. His doctoral dissertation on aesthetics and research at IRCAM provided an opportunity for theoretical reflection on his work as a composer, his residence at Villa Kujoyama in Kyoto which marked a decisive turning point in his work. His orchestral piece Cielswas awarded the Goffredo Petrassi prize in 1997. In 2003, he was invited by DAAD for a residence in Berlin. His two monographic recordings won the ‘coup de cœur’ award from the Académie Charles Cros. In 2004, together with Thierry Blondeau and Oliver Schneller he founded the Biotop(e) initiative.

His works range from concert music to sound installation and his current work includes concert-installation works devised for specific sites. He holds many master classes in France and abroad and presently teaches composition at the Boulogne-Billancourt Regional Conservatory.

In (Re)transmission, the sound boundary between the stage and audience is obliterated. Sound permeates the venue, striding the entire hall, from the stage to the audience.

In the first part, the musical material is amplified by the instrumental ensemble. In the second part, the music becomes pianissimo, pervading the audience. Singers (dressed normally) disseminated in the hall seem to be part of the audience, except that they respond to the musicians onstage. The sounds of the instruments are repeated, prolonged in soft polyphony that permeates the concert venue, like a spreading rumour.

A system of twenty small concealed loudspeakers completes this polyphony whose multiple sources seem mysterious. This antiphony between the music onstage and in the audience is articulated, interacting to end up forming one grand resonant environment filling the concert hall. Immersed in the music, the audience enjoys picking out the sounds hovering about as if they were in an unfamiliar forest inhabited by multiple presences in the environment.

Finally, in the third part, the music retransmitted once again to the musicians, returns to the stage and deploys the energy of sound until the end.