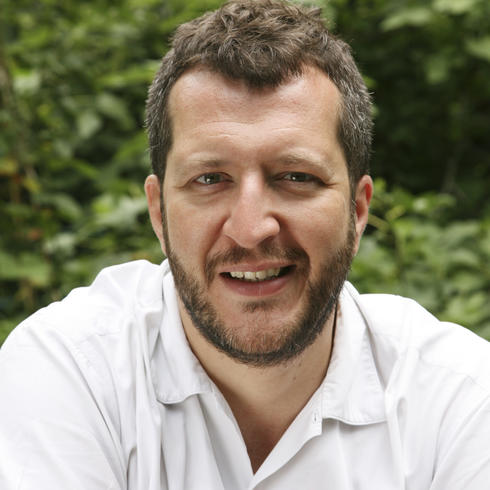 Thomas Adès studied piano at the Guildhall School of Music & Drama, and read music at King’s College, Cambridge. A prodigious composer, conductor and pianist, Adès was described by the New York Times in 2007 as one of today’s ‘most accomplished overall musicians.’

Adès’s chamber opera Powder Her Face (1995) has been performed worldwide whilst The Tempest (2004) was commissioned by London’s Royal Opera House and has since been taken up by international houses including New York’s Metropolitan Opera, where it was recorded for a Deutsche Grammophon DVD which subsequently won a Grammy Award. Adès’s third opera, after Luis Buñuel’s The Exterminating Angel, premiered at the Salzburg Festival in July 2016 before travelling to London, New York and Copenhagen.

Between 1993 and 1995, Adès was Composer in Association with the Hallé Orchestra, producing These Premises Are Alarmed for the opening of the Bridgewater Hall in 1996. Asyla (1997) was written for Sir Simon Rattle and the CBSO. In 2005 Adès premiered his Violin Concerto: Concentric Paths, for Anthony Marwood and the Chamber Orchestra of Europe, at the Berlin Festspiele and the BBC Proms. His chamber music includes two string quartets, Arcadiana (1994) and The Four Quarters (2010), a Piano Quintet (2000) and Lieux retrouvés (2009) for cello and piano.

Tevot (2007), was commissioned by the Berlin Philharmonic and Carnegie Hall whilst In Seven Days (a concerto for piano with moving image) was premiered in 2008 in London and Los Angeles. Polaris (2011) was premiered by the New World Symphony with Michael Tilson Thomas in Miami and was later choreographed to great acclaim by Crystal Pite as part of an all-Adès evening at Sadler’s Wells. Other choreographers who have worked with his music include Karole Armitage, Kim Brandstrup, Wayne McGregor and Ashley Page. Totentanz for mezzo-soprano, baritone and large orchestra was premiered at the 2013 Proms by the BBC Symphony Orchestra. Luxury Suite from Powder Her Face (2017) was commissioned by Sir Simon Rattle and the Berlin Philharmonic.

Adès has won numerous awards, including the 2015 Léonie Sonning Music Prize, the Leoš Janáček Award, and the prestigious Grawemeyer Award (2000), of which he is the youngest ever recipient. He was awarded a CBE in the 2018 Queen’s Birthday Honours. Adès was Artistic Director of the Aldeburgh Festival from 1999 to 2008 and coaches piano and chamber music annually at the International Musicians Seminar, Prussia Cove.

The first movement Allegramente opens with a statement of the theme by piano and then tutti. A march-like bridge passage leads to the more expressive second subject, first played by the piano and then taken up by the orchestra. The development section interrogates the first theme before an octave mini-cadenza leads to the recapitulation ff. There is then a solo cadenza based on the second subject, first played tremolo and then over many octaves, the piano joined first by the horn and then by full orchestra. The movement ends with a coda based on the first theme and the march.

The second movement Andante gravemente consists of a chordal introduction and a melody, which is joined by a countermelody, and a second idea with a simple falling melody over rising harmony. The first melody reappears, leading to a fortissimo climax, subsiding to a final statement of the original theme and a coda based on the countermelody.

The finale Allegro giojoso begins with a three-chord call to arms, and then a tumbling theme for piano and orchestra, which is interrupted by the blustering entry of a clarinet solo, heralding a burlesque canon. There is here a good deal of argument, with frequent differences of opinion as regards key, brought to an end by the call to arms. Eventually the piano takes up a new theme in the style of a ball bouncing downstairs and develops it to a choral climax. The tumbling material is developed, and the call to arms is heard in multiple directions leading to an impasse, a winding down of tempo, and a new slow (Grave) section in three time with a falling theme. This leads to a precipice which the piano falls off with the original tumbling theme, and a coda lining up all the other themes for a final resolution on the call to arms.

For mezzo-soprano, baritone and orchestra

Totentanz is a setting for two voices and full orchestra of the text accompanying a frieze which hung in the Marienkirche, Lübeck, Germany, depicting every member of society in the Danse Macabre in descending order, beginning with the Pope and ending with the baby. The part of Death is taken by a baritone, and all the human race sung by a mezzo-soprano. It is dedicated to the memory of Witold Lutos?awski and received its world première at the BBC Proms in 2013.
Thomas Adès

Dance, wild but tightly controlled, and all the wilder for being so, dance at once intoxicating and sinister, dance that takes over our bodies as its own – such involving and intemperate dance has been a feature of Adès’s music at least since the third movement of his Asyla. Here it is again, more so than ever before.

The Totentanz, or Dance of Death, was a topic that gripped Europe in the fifteenth century, perhaps because Renaissance humanism, which placed increasing value on the individual life, was coming up against our common human fate. Adès took his image of this ultimate dance, and his text, from a thirty-metre-long hanging of painted cloth made in 1463 for the church of St Mary in the German Baltic city of Lübeck. Itself subject to mortality, the hanging was replaced by a copy at the beginning of the eighteenth century, and that copy was destroyed during World War II. Reproductions of it, though, have survived, and these for Adès were enough. They showed Death linking hands with representatives of humanity at all levels, addressing each differently in the underlying captions, but with the same ineluctable message, to which each responds, generally with sorrowful resignation.

Adès cuts the cast of human characters from twenty-three to sixteen, adapts the words, and sets Death’s part for a declamatory yet lyrical baritone, while a mezzo-soprano sings for all his victims. In the text, the two voices largely alternate, but with the important difference that where each of the human beings replies directly to Death’s invitation to the dance, Death is always moving on to the next. Adès varies this back-and-forth dialogue in the later stages of his work, but still it remains the case that human reactions, variously expressed as they may be, are all futile. Death is not a great listener.

The interplay between one who only declares and those who hear and answer, between statement and response, between reiterated summons and ever renewed lament, is thrust forward by and within an immense orchestral machine, involving a large percussion section. This machine, we might imagine, gives us the voice of Death’s great ally, Time, which enters with a surge onto whacking chords and then, in octaves across the whole orchestra, introduces the baritone to present, as preacher, this coming ‘play’.

Even while the preacher is addressing us, the dance, which swirls and swells on from an initial oscillation, is already beginning – a piccolo starts it – but it really gets going when the baritone takes on the voice of Death, to call first on the pope. Death’s proposal is different every time, shaped towards the intended recipient, and, in a score that also features incidental word-painting, each human character has a different voice, and a different orchestra. The pope, for instance, sings with upper strings in free rhythm, the cardinal with woodwind and strings in flowing quavers that are perhaps seeking a way out – and fittingly it is here that Death first re-enters, to create a duet. A score of constant variety and telling detail results from the changing scenes, even while the dance is all the time waiting in the wings, ready now and then, between these wasted discussions, to bound forward again.

There are also moments of stillness, of an exquisitely expressed emptiness, as in the dialogue with the monk. Then, after the knight has had his say, with soft drumming and the dance in the oboes, Death becomes more impatient, and rushes through the mayor, the doctor and the usurer. After this comes a slow duet for Death and the merchant, their voices moving together as the orchestra readies itself for the climactic eruption of dance. For a moment this seems to exhaust Death, and he allows the parish clerk to have his say – in a passage of fine pianissimos – before for once chiming in second, lyrically. Two further long scenes follow, with the craftsman (a self-portrait) and the peasant, ‘perhaps representing’, the composer suggests, ‘the extreme opposite poles of human resistance and acceptance, and of Death’s animosity or lack of it.’ From this point we may feel that the dance of death is becoming more a love song of death, leading on to another pianissimo sequence, with the maiden.

Now there remains only, alone in the world, a child. The child has few words, repeating them over and over, with growing passion, before sinking into Death’s arms.

Totentanz was commissioned by Robin Boyle in memory of Witold Lutoslawki (1913-1994) and of his wife Danuta.