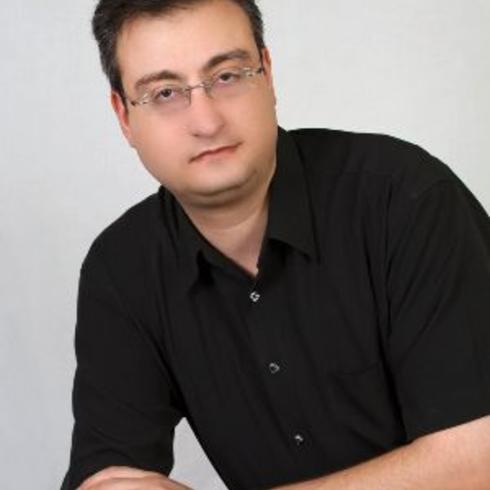 Following a formation at the Catholic Seminary of Beit-Jala (with the objective to become a priest), Haddad continued his studies of philosophy in Belgium, after which music composition in Jordan, Israel and England (teachers incl. George Benjamin).

In his works from 2004-2006, Haddad focused on achieving a synthesis between the Western and the Arabic traditions; this has been accompanied by a thorough study of the Arabic culture (until today). From 2007-2014, Haddad has been questioning the idea of forgetfulness of the Arabic culture using certain techniques which enable filtering memory while introducing elements of oblivion. From 2015 until now (especially with the aftermath of the Arab Spring), Haddad sees in musical composition (and in memory) an ethical responsibility sharing the pains of other human beings; this period is marked by a dark and melancholic character.

Haddad's music has been commissioned and performed by most prestigious international ensembles and orchestras in Europe, North America, Australia, Africa and Asia under the batons of Daniel Barenboim, Heinz Holliger, George Benjamin among others.

Haddad served as ‘composer-in-residence’ with numerous ensembles, orchestras and festivals. He was guest lecturer at many universities and was invited guest at many radio and TV stations.

Many honors rewarded Haddad's work including the French and German ‘Prix de Rome’ 2008-10, the deutsche Schallplattkritik Preis 2010, Nomination for the German Music Composers’ Prize 2013 and The Koussevitzky Music Foundation Commission- Library of Congress 2014.

His music can be heard on labels such as WERGO, NEOS and Ensemble Modern.

I humbly believe that part of my responsibility as a composer is to be closer to the pain of other human beings. The idea of composing A Wintery Spring began back in late 2014 as a project which aims to engage with some aspects of the present political and social fabric of the Middle East, i.e. my native culture which I left behind when I moved to Europe in 2002. The same position was taken a century ago by the famous poet and writer, Gibran Khalil Gibran (1883-1931), who was also born to a Christian family (in Lebanon), but who emigrated to the US. Gibran’s kept the East, though distant geographically, close to his mind and heart; he also appreciated the West where he was living. He learned from both cultures, and contributed to both through his writings in Arabic as well as in English.

The quest for freedom, dignity and justice which began in many Arab countries in early 2011 with the movement known as the ‘Arab Spring’ turned sadly, yet unsurprisingly at least for me, to a wintery spring full of fire, death and tears resulting in huge catastrophes which have no clear or expected end until this very moment. Gibran experienced similar situation back in the beginning of the 20th century as the present so-called Arab countries were under the occupation of the Othman empire. Inspired by the present in which he lived, Gibran wrote texts which bear an uncanny resemblance to contemporary events, to this very day. Is history repeating itself? Is history an everlasting inescapable present?

I chose three of Gibran’s texts which reflect the situation in the Middle East since the beginning of the ‘Arab Spring’ in 2011 until today. The three texts –as organized in the libretto- are:

These three texts were separately written by Gibran and were not connected. In order to create a stronger dramatic sense and flow between Gibran’s texts, I extracted, edited and linked them together in such a way as to allow them to function as a libretto; however, also in a way that ensures they remain essentially Gibran’s.

A Wintery Spring is scored for 3 solo singers (high soprano, mezzo-soprano & baritone), a prerecorded vocal ensemble and 17 musicians. ‘A Wintery Spring’ attempts, however, at avoiding the tradition of operatic music at many levels. For example, the 3 solo singers are featured as abstract characters and when not singing they are asked to remain off-stage. The total duration of singing in the whole work (including the prerecorded vocal ensemble) is ca. 18 minutes only. That said, the remaining ca. 27 minutes of ‘A Wintery Spring’ are filled with pure music and an empty stage; something which -I hope- would offer a challenging opportunity for finding creative and imaginative ways of new staging possibilities.

La Mémoire et l'Inconnu can be understood as my graduaI recognition of the futility of trying to establish my own sound-world by adhering to my previous findings. I was imprisoned by my memories and could not aspire towards new discoveries. The first third of the piece shows the process of adhering to my previous findings, which function here as memories that could not go beyond themselves. The other two thirds (starting at Tenebroso, m.93) establish a transcendental expérience reflecting on the raIe of memory. Every moment in the piece establishes a memory and an unknown simultaneously; rethinking the past while holding a tension for the unknown future. A few memories of my previous pieces were included as gestures, not as quotations, stressing the dichotomy between distant and close memories.

Furthermore, the piece uses a Christian theme, the struggle between light and darkness, symbolized by the use of low versus high registers; the resurrection through passing the experience of death. The piece uses also the oud (Arabie lute) as a soloist.

The oud undergoes a similar experience of struggle between high and low registers and experiences a metaphorie death and resurrection. The term Cadenza memore (a cadence which remembers) was used in order to stress the roIe of cadence (in this particular piece) as an experience of reminiscence.
Saed Haddad