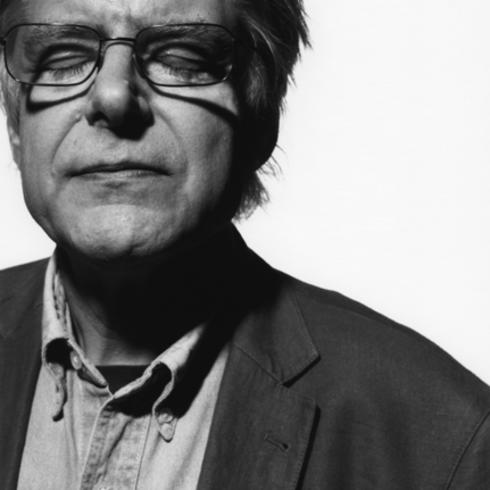 Born in Athens in 1945, Georges Aperghis studied music and piano in his native Greece, almost self-taught, his prior training was in painting. He came to Paris in 1963 and was forced to stay to escape the military dictatorship, he began musical studies
and followed courses in conducting and percussion. He is also a student of Iannis Xenakis, who initiates him with the "mysteries" of modern techniques.


Impressed by Sur Scène by Mauricio Kagel, Aperghis oriates himself towards musical theater and meets Antoine Vitez for whom he composes numerous musics for the scene from Racine's Phedre created at the Théâtre d'Ivry in 1973, to the latest ambitious shows of Chaillot, Le Faust and Rangda in 1987 or le Tombeau for the five hundred thousand soldiers of Guyotat. So many harsh and strained works, often written in a traditional form (for voice, string quartet ...), at antipodes of sophistication or contemporary radicalization.


Georges Aperghis's music always exceeds the strict framework of a concert to switch to history, in the manner of a an occidental storyteller whose music is just a vehicle, a way to communicate.


Even if he sometimes composes a purely musical piece, Aperghis can not escape the theater. In 1976, he founded ATEM (Atelier Théâtre et Musique) in Bagnolet. The troupe move in 1991 to Amandiers in Nanterre and create there several performances that cheefully dynamite the type. By giving depth to all words beginning with the letter H (1992) to the language of the sixteenth century that he practices with gluttony, to the magic of Balinese gamelan set, which establishes the concert to the dignity of a religious experience in his opera Tristes Tropiques, according to the autobiographical work of Claude Levi-Strauss, Georges Aperghis is today the most marginal composer but also the most human of his time.


Since 1997, Georges Aperghis has decided to conduct a more solitary path by leaving the direction of the ATEM. He focuses more on writing and pursues parallel stage work, particularly in Strasbourg where he was composer in residence in 1997 and 1998 and in Munich where he creates a show inspired by Goethe, Kafka and Klee in 1999, Zwielicht."


His recent works include Machinations (2000), a musical show for four voices and a computer and especially Die Hamletmaschine Oratorio (2000), which is probably the most complete and most significant of his current concerns. In 2002, he comes back to Heiner Müller with Paysage under surveillance for two actors, two keyboards, two cellos and two synthesizers before signing a new opera Avis de tempête in 2004.

Wolfi Kantate, a work in five-movements with texts from Adolph Wolfi, for mixed choir and vocal ensemble (six solos), was created on 22nd July 2006 in Stuttgart by the Stuttgart Neue Vocalsolisten and the SWR Vocalensemble of Stuttgart. This is an order from Sudwestrundfunk of Stuttgart and the Strasbourg Musica Festival.


"This cappella cantata is inspired by the textual and pictorial work of Adolf Wölfli and develops certain pulsions that are within it (compulsive over-filling of space enumerations of numbers, inventory, ritual rehearsals, over enlarged details, over loaded,constantly diverted from their original meaning, polyphonic
saturated ...) while keeping a distance, a "harmony", which canalize these excesses and proliferations. It is therefore architectures creating imaginary spaces, sometimes recognizable, combining themselves in a furtive and fleeting way. These musical figures try to find their way as if in a maze, and eventually finish by invading everything, thus abolishing the silence, establishing an organic but painless function." (Georges Aperghis)