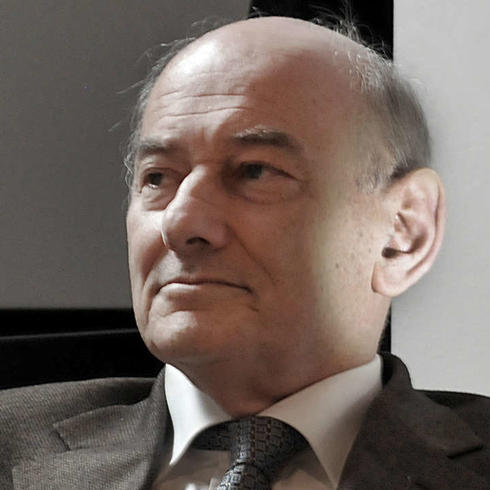 Hugues Dufourt favours slow transformations of a seldom-interrupted musical discourse. He conceives forms through the evolution of masses and focuses on the concept of thresholds, of oscillations, of interference, and directional procedures. A pioneer of the spectral movement, he, however, gives it a more encompassing definition, attempting to highlight the instability that timbre introduces into orchestration. His music is based on a wealth of sonic constellations and harmonics, and relies on dialectics of timbre and of time. He draws part of his inspiration from pictorial art, essentially retaining the role of colour, mediums, and light (Dawn flight, string quartet premiered in 2008 at Musica, Le Cyprès blanc and L'Origine du monde, premiered at Musica in 2004).

Strongly influenced by the French avant-garde of the 1960s, Hugues Dufourt collaborated with l'Itineraire (1975-81) and in 1977 founded the Collectif de Recherche Instrumentale et de Synthèse Sonore (CRISS) with Alain Bancquart and Tristan Murail. Specialist in Philosophy in 1967, he has published numerous texts. He was a researcher (1973-85) then director of research at the CNRS (1985-2009) and in 1982 created the Unité Mixte de Recherche "Recherche Musicale" that he directed until 1995. Hugues Dufourt has received many awards, in particular the Presidential Prize for his entire oeuvre, from the Académie Charles Cros.  These last years, Hugues Dufourt composed works with differents instrumentations ; from solo piano (Tombeau de Debussy, premiered at Festival Musica 2018) to large orchestra (Ur-Geräusch, premiered in 2016 by the WDR Orchestra) but also quartets (Le Supplice de Marsyas d'après Titien, for Arditti Quartet, Les Courants polyphoniques d'après Klee for Amstel Quartet) or percussions (Burning Bright, premiered by Les Percussions de Strasbourg at Festival Musica 2014).

Encouraged by Clemenceau, his lifelong friend, Monet worked from 1914 to 1926 to create two immense cycles dedicated to the theme of water landscapes: waterlilies, willow branches, representation of shadows, reflections of trees and of clouds. On this subject, Monet stated, "The essence of the motif is the water mirror, the appearance of which changes all the time thanks to the areas of sky reflected in it and which give it life and movement. " (*) Monet had envisaged the creation of a circular pictorial space since 1897 which would eliminate critical distance and would plunge the viewer into "the illusion of an endless whole, a wave with no horizon nor shore." With Clemenceau's support, Monet undertook a project whose excess surpassed the very principles of impressionism. He came to accept the idea of the very large format, and that of a decorative development, of a sequence of works in the continuity of becoming. Furthermore, The Waterlilies require the presence of an architectural framework. Clemenceau decided that the State would provide it. The old greenhouse of L'Orangerie, built under the Second Empire on the Terrasse of the Tuileries, was chosen as the setting. Oriented east-west, it runs parallel to the Seine. Its glass roof allows daylight to enter. In this way the pictorial work is exposed to the real lighting of the space, which varies according to the hours, days and seasons. The Waterlilies appear to be the culmination of the impressionist gesture. The oval shape of the rooms in L'Orangerie eliminates perspective and visual illusions. It creates an impression of depth conducive to the autonomous expansion of colour.

The Two Willows panel is of a strange simplicity of composition. The foreground is occupied by the surface of the water and enclosed at the ends by two curved willow trunks. Seventeen metres long, deeply concave, this canvas seems to float in space. An imperceptible gradient of shades has replaced the violent contrasts of old. The pink-blue tones, pale blue-greens, mauves and purples of the water landscape curiously recall those of the winter landscapes painted in Vétheuil - La Débâcle, Les Glaçons, L'Hiver près de Lavacourt and Coucher de Soleil sur la Seine, l'hiver. Written for a large orchestra, the music is inspired by the water landscape of the Two Willows and, like it, extends over a period which no accident is going to interrupt. It pursues "the illusion of an endless whole, a wave with no horizon nor shore." The tonal colour, which acts as an original impression, acquires an independent value and creates a world where phenomena are in constant flux and transition. However, the work cannot be reduced to this regime of fluctuations nor to this style of fragmentary glimpses. On the contrary, it starts by seeking the internal continuity of a period. The Two Willows was commissioned by WienModern.

(Lyon, 1943)
Hugues Dufourt studied piano in Geneva with Louis Hiltbrand and composition with Jacques Guyonnet, with whom he worked at the Studio of Contemporary Music Geneva (SMC), and created his first works: Brisants, Mura della Città di Dite, Down to a sunless sea, Dusk light... Graduate in Philosophy in 1967, Hughes Dufort takes part in the concerts of the group Musique de Temps in Lyon, and becomes, in 1968, head of music programming at the Théâtre de la Cité in Villeurbanne, under the direction of Roger Planchon, while teaching Philosophy at the University of Lyon. He joined the CNRS in Paris, participates in L'itineraire (1975-1981), created in 1977 and le Collectif de Research Instrumentale Synthèse Sonore (Criss), with Alain Bancquart and Tristan Murail. In 1977, Erewhon is created by the Percussions de Strasbourg, under the direction of Giuseppe Sinopoli, followed in 1979 at IRCAM, followed by Saturne, for 24 instrumentalists under the direction of Peter Eötvös. In 1985, the creation of Surgir by the orchetra de Paris, causes a scandal. Pierre Boulez created in 1986, L'Heure des Traces, at La Scala in Milan.


Invited by the Franco-American Festival French Sounds, Hugh Dufourt was played in New York March 4, 2003 at Merkin Concert Hall in New York by l'Ensemble Speculum Musicae under the direction of Jeffreyand Milarsky, Le Cyprès blanc for alto soloist large orchestra was created at Musica in 2004 (Strasbourg) by the Luxembourg Philharmonic Orchestra under the direction of Pierre-André Valade with Gerard Caussé solo. L'origin du monde for solo piano and instrumental ensemble is created at Musica in 2004 by the Ensemble Orchestral Contemporain under the direction of sDaniel Kawka with Ancuza Aprodu as soloist. Dedicatee of the work, François-Frédéric Guy creates Erlkönig for piano, 18 October 2006 at the Auditorium of the Musée d'Orsay in the Festival d'Automne in Paris. Commissioned from the RAI,... (the hight of the moment), for oboe and orchestra, was created in 2006 in Turin by Francesco Pomarico (oboe) and Emilio Pomarico at the head of the orchestra of the RAI. Nima Sarkechik created on 1 April 2008 La Ligne gravissant la chute, for piano in Printemps des Arts de Monte-Carlo. The Arditi quartet creates on September 26, 2008 Dawn Flight at Musica de Strasbourg, a joint commission of Musica de Strasbourg, Witten Festival and Ars Musica in Brussels.


Hughes Dufourt was awarded the Grand Prize of the Chamber Music (SACEM) in 1975, the Grand Prize of the Charles Cros Academy for the registration of Saturne in 1980, the Prize Koussevitsky in 1985 that of Antiphysis, the Jury Prize of Film Music Festival Hommage à Charles Negres in 1987 and the Composers Prize from SACEM in 1994. In 1999, L'Académie du Disque Lyrique awards to Dédale the Orpheus of the best recording of a French composer (Prix de la SACD). For the 53rd palmares of the Charles-Cros Academy, Hugues Dufourt receives in 2000 Prize of the President of the Republic for lifetime achievement at the first recording of Erewhon. He received,20 November 2008 the Diapason d'Or of the Year for recording of Le cyprés blanc and Surgir by Gerard Caussé on viola, and Pierre-André Valade at the head of the Orchestre Philharmonique du Luxembourg.

Dawn Flight is the title of a painting that the British painter and engraver Stanley William Hayter (1901-1988) realized in 1959. His scientific training - chemistry, geology - a mathematical skill was a tremendous asset in his research for materials and colours, which can reach fluorescent tones. Hayter, who was one of the leading figures of the surrealist movement, began in New York on ways of abstraction, along with Pollock, Rothko, Baziotes, Matta, Motherwell, De Kooning, Riopelle. He is recognized as the man who revolutionized the techniques of printmaking in the twentieth century. He invented the process that allows obtaining multiple colors onto the same plate in a single go. Back in 1950 in Paris, he experimented with new techniques of engraving: prints, use acid on the metal and especially the multi-point chisel. He continued research on the emergence of forms, of transparency, interference, vibration, the fates. His paintings intensify the colour, dynamic gesture, and attaches at the end and captures the play of light on the surface of the water.

Dawn Flight is built on a range of different oblique,going up the diagonal, illustrating the paradox of an upward flow, drawn from the top.The stretched and elongated form of the streaks, the inner torsion of the frame, the paradoxical interlacing tension give the impression of a basic reality of the dawn of a world. Hayter 's production at the time - Perseids, Poisson volant, Vague, Ixion, Cascade, Meru, Medusa Night - shows strange associations of blue and black, orange, transparent yellow, blue and green. Frank Stella and Donald Judd are among the artists who most radically challenged the idea of a trial art instructor, removing even the idea of inner necessity, or even formal composition. Transparency, depth, thickness, radiation would only be a false category taken from an illusion of interiority and the idea of structured progression would be that of the effect of tyranny from within.

What is the quartet which was par excellence the construction of interiority, the epitome of a refined compositional logic and reduced to the essential form of development ? To write a quartet after Donald Judd is it still possible ? Because it is not enough to be confronted with the story of a kind, but the question of its possibility. The very idea of a dynamic voice does it still make sense ? And that of a whole whose parts are interdependent ? We no longer dare talk about texture as it is still an internal form, the expression of an inner coherence. To write a quartet could mean a return to a consideration of the basic forms of movement - like attraction, repulsion, inclusion or penetration. Or on the meaning of gestures like break, cut, tear or crack. It would also return to what an interference of fluctuations, on the plasticity, or otherwise disorderly tension. Unless you remove the quartet, we must agree that it is the image of a tissue, an unbroken continuity of a thread and it is the ultimate human achievement: writing a quartet is reknotting the thread. Wrinkle, twist, bend, spread out, roll, are the foremost needs of the quartet, which is sometimes called silky or watered.

Judd and his contemporaries made obsolete the idea that a work can formulate and follow clear rules, ensuring the preservation of a form to a certain set of transformations. In this view, thinking music would be made to a state of instability, constantly sliding. But then it could perhaps find new patterns of connection, and give an original meaning to the idea of oriented processes, giving it the form becoming global and unique, with no repetitions.


The recent music knows how to encourage the emergence of new properties and absorbed in the higher reality it creates: it is not so much imagination of the possible that the joint moments of the experience.

Back to Hayter, it would be to focus on a specific interval and topology of connections, thinking of music as a flow, modulation, perpetual emergence, light illocalisable, mass or growth without taking spin.
Here are some good reasons to write a quartet.