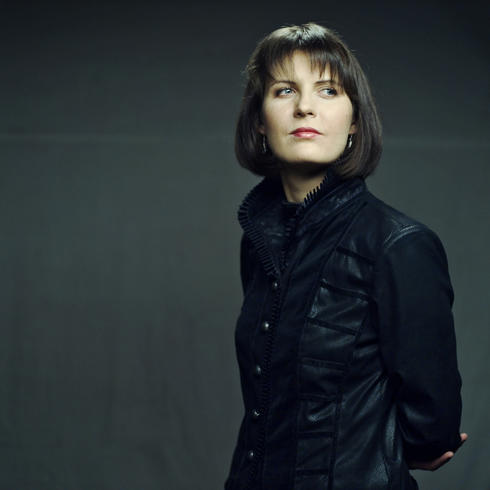 
Raminta Šerkšnyte started piano at 6 with her aunt Rymante Šerkšnyte and took courses in composition at the Gymnasium of Juozas Naujalis Music in Kaunas from 1982 to 1994. From 1994 to 2000 she studied composition with Osvaldas Balakauskas the Lithuanian Academy of Music. She also followed numerous master classes in composition with Louis Andriessen, Magnus Lindberg, Pascal Dusapin, György Kurtag, Helmut Lachenmann and many others in Germany, France, Netherlands, Norway, Sweden, Latvia and Great Britain.

In 2005, she received a grant from Schöppingen Foundation (United Kingdom), in 2006 the Civitella Ranieri Fellowship (Italy) and in 2007 the Künstlerhaus Lukas scholarship (United Kingdom).

In 2008 the composer lived and worked at the Visby International Centre for Composers (Sweden). In 2010 she is credited with the UNESCO-Aschberg, a grant for the creation of a work in residence at Sacatar (Brazil).

In 2005, she was awarded the Gold Cross Stage (as the best composer of theater in Lithuania) and the prize of the young artist by the Ministry of Culture in Lithuania. The same year, her work for solo violin Vortex and large ensemble was chosen as the recommended work in general and in the "young" category at the International Rostrum of Composers in Vienna, she appears also among the finalists for the Gaudeamus Prize (Amsterdam ). In 2008 she received the Prize for Arts and Culture Lithuanian national.

The news is dominated by the creation of her work for symphonic orchestra in October, interpreted by the Bavarian Radio Symphony Orchestra, conducted by Mariss Jansons in Munich (hall Hercules).

Her music is characterized by a great expression, colorful images and great communication skills, and the constructive principles of Western music are intertwined with the subtlety and contemplation of the East.

The composer attaches much attention to the dramatic development, the dynamics of the instrumental form and matter .

In addition, many of her compositions resemble soundscapes colored apparently inspired by the image of the exalted nature.

It defines itself as the composition a certain state of mind above the others, realized by means of sound from which all expression depends on the technical mastery of the composer.


Le solstice d’été, when the day is the longest and night is the shortest of the year, has its rituals and beliefs for a very long time. For me, this time in the middle of summer is full of mystery and thrills awaiting dawn.


I made my work as a sort of pantheistic song, in which the original melodies, from separate notes, spread slowly in the variety of colors and shapes (the melodies sound like stories, arias and choruses). Finally, after a climax full of ecstasy, the song gradually disappears, giving way to meditative music in the morning of "l’été infini."


Thanks to the Maestro Gidon Kremer and his Kremerata Baltica Orchestra, for their friendly support.